The medical term 'aneurysm' (from the ancient Greek word 'aneurysmos' meaning 'dilation') describes where there is an abnormal bulging in the walls of a blood vessel. Where this occurs in a blood vessel in the brain it is referred to as a brain aneurysm (sometimes referred to as a 'cerebral aneurysm'). Brain aneurysms can occur anywhere along the arterial circulation inside the skull, but are often located where the arteries branch from larger diameter vessels to multiple smaller ones.

Aneurysms can vary in size and shape. The more common type of aneurysm is known as a 'saccular' or 'berry' aneurysm, where a pouch or pocket develops from the side of a blood vessel that expands like a 'balloon'. The portion of the aneurysm that is attached to the blood vessel is called the ‘neck’ or the ‘base’, and can vary from a small opening (also known as ‘narrow-neck’) to a wide opening (‘broad-neck’ or broad-base). The outer surface of the aneurysm is called the ‘dome’ and maybe smooth or irregular in contour. Sometimes, the aneurysm is an expansion of the whole diameter of the blood vessel, and is known as a ‘fusiform’ aneurysm.

The danger with a brain aneurysm is that it can either leak or rupture and cause bleeding inside the brain. The bleed is called ‘subarachnoid haemorrhage’, which is a type of haemorrhagic stroke and is a medical emergency requiring immediate medical treatment. However, the majority of brain aneurysms have not ruptured and may rarely cause symptoms or damage to surrounding brain structures, and they are often detected during tests for other conditions.

Brain aneurysms are caused by the development of weaknesses in blood vessels that often form at junctions of blood vessels in the brain. These can in turn be caused by other factors, including…

Less commonly, brain aneurysms can be caused by…

As described above, brain aneurysms generally cause no symptoms at all. However, if an aneurysm ruptures, the following symptoms often occur…

Any of these symptoms indicate a medical emergency and require immediate medical attention. When an aneurysm enlarges in size, this can sometimes cause sudden mild-moderate intensity headaches (‘Sentinel headaches’) and may be a sign of aneurysm instability. If an aneurysm compresses nearby brain and nerve structures, this lead to blurred or double vision, and occasionally stroke-like symptoms.

Anybody with symptoms of an aneurysm rupture as described above will need urgent medical attention in an emergency department. Assessment with physical examination, and CT (computed tomography) scan of the brain will be performed. If carried out within 72 hours of the onset of symptoms, a CT scan has a very high probability of detecting bleeding from brain aneurysm rupture. When this is not detected, a ‘lumbar puncture’ (LP) test may be required to check if there is blood present in the cerebrospinal fluid (CSF). Other tests that may be performed to assess aneurysms include: CTA (computed tomography angiography), MRA (magnetic resonance angiogram) or DSA (digital subtraction angiography). CTA and MRA are less invasive methods to evaluate aneurysms that may use injection of contrast dye into the veins. DSA is a more invasive procedure that uses a catheter guided through a plastic sheath placed in the groin artery and contrast dye is injected into the head arteries once the catheter is positioned in the neck. (See Cerebral Angiogram). 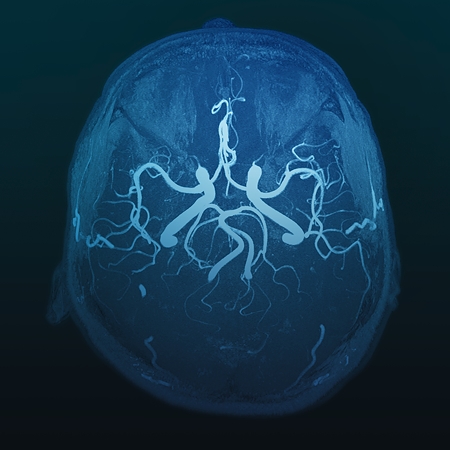