The word 'radicular' refers to something involving a root ('radicul' means 'root' in Latin) and in medical terms this refers to a nerve root. Sciatica, which is a common form of radicular pain, describes pain that extends down the back of the leg (commonly along the 'sciatic nerve') and in some cases into the calf muscle and the foot. The word 'radiculopathy' itself describes the related nerve dysfunction, and is described according to the section of spine affected - lumbar radiculopathy is where the lower back is involved and cervical radiculopathy is where the neck section of the spine is involved. It can sometimes be difficult to distinguish symptoms caused by the pinching or compression of a nerve root (which is radiculopathy) from nerve damage affecting another section of the nerve (peripheral neuropathy), which is why accurate diagnosis of the condition is important.

Radiculopathy results from a spinal nerve root being compressed and / or being affected by inflammation. This is generally caused by another condition such as disc prolapse, foraminal stenosis (see section on spinal stenosis here) or the formation of scar tissue from previous spinal surgery (peridural fibrosis). The condition can also result from the growth of bone spurs in the spine, which in turn may be caused by degenerative conditions such as arthritis, or from injury (trauma).

Symptoms of radiculopathy involve a change in sensation - either pain or a numbness / tingling, or muscle weakness or loss of reflex in the part of the body connected to the spinal cord by the affected nerve root. This area of skin / tissue that is affected is referred to as the relevant 'dermatome'. Areas of the body that are generally affected include the back, shoulders, arms or legs (depending on the specific nerve/s affected). Pain from sciatica for example is often caused by certain activities, such as walking or sitting, and the pain is generally a deep and constant type of pain.

Tests involved in the diagnosis of the condition may include… 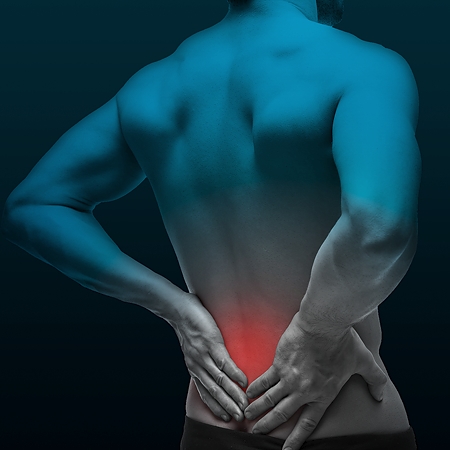