Stroke, in general terms, is any sudden vascular injury to the brain. It represents one of the biggest killers in the world. In Australia, a new stroke is estimated to occur once every nine minutes. Stroke can be divided into 2 main types: Ischaemic strokes (where there is a blockage in a blood vessel supplying oxygen and nutrients to the brain); or Haemorrhagic strokes (where there is bleeding into the brain tissue itself). Approximately 80% of strokes are due to blockage, while 20% are due to bleeding. In case of ischaemic stroke, damage to the brain from stroke can potentially be reversed if blood flow is restored within a short period of time. Every minute the brain is deprived of blood, 2 million brain cells or neurons die (or permanently damaged) and cannot be replaced. Therefore, there is a motto: Time is Brain! Recent innovations in medical science have allowed neuro-interventional surgeons to reopen blood vessels that are blocked for up to 24 hours, and be able to improve outcomes on stroke patients. (See Stroke – Endovascular Clot Retrieval). A number of risk factors can lead to increased risks of developing strokes, and some of these are preventable.

Ischaemic Strokes (Blockage in brain artery) can be caused by:

Stroke symptoms occur suddenly, and may involve any of the following:

Early recognition is vital because every minute counts. An easy way to remember the signs of stroke are: F – Face: Check the face, has the mouth drooped? A – Arm: Lift both arms, does one side sag? S – Speech: Is the speech slurred? Can they understand you? T – Time: Time is critical. If any of these signs are present, call an ambulance.

Anybody with symptoms of stroke as described above should be transferred urgently by ambulance to an emergency department, preferably in a stroke centre. Urgent assessment with physical examination, and CT (computed tomography) scan of the brain will be performed. CT scan will determine if the stroke is likely to be ischaemic or haemorrhagic. Other tests that may be performed to assess ischaemic strokes include: CTA (CT angiography) and CTP (CT perfusion), which will determine if there is a blockage in a large blood vessel supplying the brain, the amount of brain tissue already lost, and the amount at risk of permanent damage if blood flow is not restored. At other times, MRA (magnetic resonance angiogram) or MR perfusion may also be performed. For haemorrhagic strokes, usually an additional CTA is sufficient to rule out an aneurysm or brain AVM. DSA (digital subtraction angiography) or cerebral angiogram may be performed, either to rule out other causes for haemorrhagic stroke, or as part of further treatment of the stroke, e.g. Endovascular clot retrieval for acute stroke vessel blockage, or endovascular treatment of aneurysms or brain AVMs. 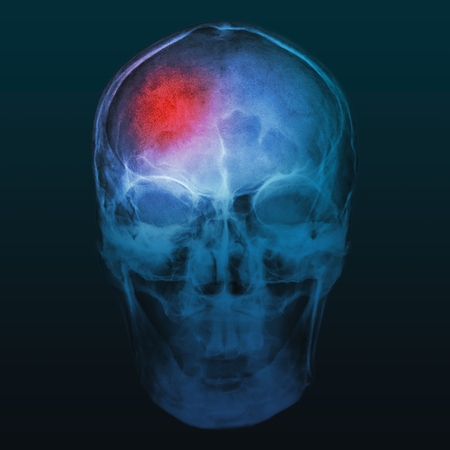